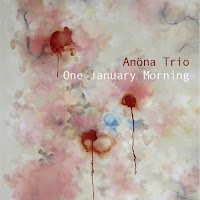 Since it's release on 1st June 2019, Anöna Trio's debut album 'One January Morning' has achieved airplay on Clair Teal's Radio 2 show who described it as "Beautiful and moving" and on Radio 3's Jazz J to Z... "Absolutely beautiful" Kevin Le Gendre

Peter Quinn writing in JazzWise Magazine not only gave it 4 stars but also included it in his Top Ten albums of 2019 :

" One January Morning instills itself into your heart for its melodic beauty and emotional sincerity... the trio's arrangement of Carla Bley's 'Lawns' is one of the most exquisite things I've heard all year"


“… When Ryall scats …… she astounds with a superbly executed solo that balances fertile ideas with well-placed silence”. Tom Cunniffe, JazHistoryOnline.com

Imogen was born in London into a theatrical family, both parents were actors (her father was the late David Ryall) and her great uncle was Robert Eddison. She made her singing debut at the age of 17 at the Chichester Jazz Festival supporting Kathy Stobart and went on to study jazz at the Guildhall School of Music & Drama and whilst there, was lucky enough to study and work with the likes of Norma Winstone, John Taylor and Kenny Wheeler.

She soon became a regular performer on the London jazz scene and over the years has worked extensively both nationally and internationally including residencies at the Dorchester Hotel, London and for the Crown Plaza group in Seoul, Dubai and Oman and at venues closer to home such as the 606 Club, Jazz Café, Ronnie Scott’s and The Barbican Hall

Described as possessing “a very lovely voice indeed” by Jazz FM’s Sarah Ward, Imogen’s skillful improvising and her unique and heartfelt interpretations of the jazz standard repertoire have made her a popular performer with both audiences and musicians alike.

"I love Imogen's voice. She sings with heart and intelligence, sensuality and style; a natural musician." Claire Martin OBE.

In 2014, Imogen began recording and performing with Mark Edwards' band Cloggz at venues including The Old Market, Brighton; Watermill Jazz Club, the 606 Club and at Love Supreme, Cheltenham, Brighton and South Coast Jazz Festivals. They launched their debut album 'Sawdust and Spangles' in 2016 which reached No. 5 in the ITunes Jazz chart.
Singer and Radio 2 broadcaster, Clare Teal chose the Cloggz CD as her album of the year in an interview in The Independent on Sunday: ".....great song writing too. A Rain of Stars (by Edwards and Ryall) is a stand-out song".

She performed at the South Coast Jazz Festival in 2016 with the Jack Kendon Quintet which included a song specially commissioned and co-written with Kendon.

As a lyricist, Imogen has penned lyrics to a number of compositions by various composers including Larry Goldings and Carla Bley. Most recently, her lyrics appear on two albums by multi award-winning vocalist, Claire Martin OBE: ‘Bumpin’  - A Celebration of Wes Montgomery’ for Danish label, Stunt and her most recent release for Linn Records, ‘Believin’ It’.

"The addition of the honey-toned but incisive voice of Imogen Ryall was the icing on the cake. Her pitching flawless, she somehow manages to combine an apparently effortless precision with a warm, inviting sound, drawing the listener in to her beguiling world". LondonJazzNews
Imogen has recorded 3 self-produced albums, ‘Alone Together’ with guitarist Andy Williams; ‘Waltz for Ruth’ with Rod Hart and Dave Green and ‘There Will Be Time’ with the Jack Kendon Quintet featuring Julian Nicholas.

Email ThisBlogThis!Share to TwitterShare to FacebookShare to Pinterest
Home